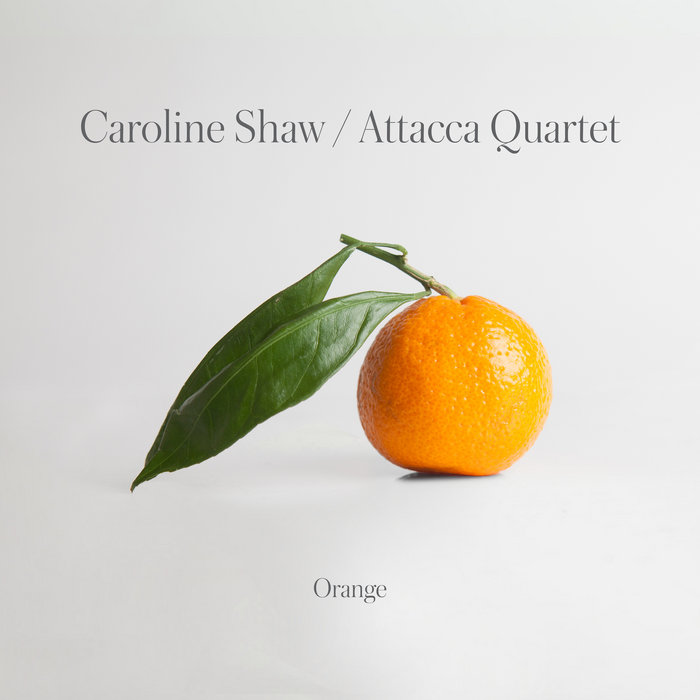 Cordâme Very creative writing by a very talented composer. The sound is great and the playing is just superb. A fantastic string quartet record.

Peter Yost I enjoy how Caroline Shaw handles some of these more contemporary-string-quartet-sounds with such sincerity, and blends them with Romantic Ravel-like movements. Favorite track: Plan & Elevation: I. The Ellipse.

Rolf's Stuff Woaw! I could not resist. Progressive classic at its best - fresh served on a juicy orange. Favorite track: Plan & Elevation: III. The Herbaceous Border.

Rex Mobin I sat in the parking lot of an O'Riley's for twenty minutes listening to this through static radio, until the DJ finally told me where to find it. Favorite track: Ritornello 2.sq.2.j.a.

New Amsterdam and Nonesuch Records release Pulitzer Prize–winning composer Caroline Shaw’s Orange, performed by Attacca Quartet, on April 19, 2019. Orange, which features six of Shaw’s pieces for string quartet, is the first full-length album to exclusively feature works by Shaw. It is also the first release in a new partnership between the two record labels, established with the goal of enabling contemporary American composers to realize creative ambitions that might not otherwise be achievable.

Orange is available for pre-order now at iTunes, Bandcamp, and the Nonesuch Store, where the album track “Plan & Elevation: IV. The Orangery” may be downloaded immediately. Nonesuch Store and Bandcamp pre-orders also come with an exclusive print of a painting created and hand-signed by Shaw and Attacca Quartet. The album will also stream at Spotify, Apple Music, and other digital service providers.

Composer Caroline Shaw is also a singer in the Grammy Award–winning vocal ensemble Roomful of Teeth, for which she wrote the piece that won the Pulitzer Prize: Partita. She has also played violin since the age of two and been drawn to the string quartet for most of her life. She says, “It has existed for hundreds of years, but there’s something kind of, for me, beautiful and ritualistic about coming back to that form. It’s something familiar, and yet you can keep on opening these doors and diving down these little rabbit holes. Just the simple changes of harmony and the shape of the bass line, and how that can create a whole world.”

Shaw describes the world she built for Orange as a garden that she and Attacca Quartet are tending. She used the group’s centuries-old combination of two violins (Amy Schroeder and Keiko Tokunaga), viola (Nathan Schram), and cello (Andrew Yee) to create a rich environment where traces of what has grown there before—left by Haydn, Mozart, Ravel, Bartok, Bach, Monteverdi, and Josquin—provide nourishment for new life.

“Hints of past years’ growth remain in the soil, and so the new growth has been partially shaped by the old,” explains Shaw. “The colors are vivid and familiar, and the shapes of the leaves follow a pattern that you seem to know until you don’t.” She continues, “This album is a celebration of the simple, immediate, unadorned beauty of a natural, everyday, familiar thing.”

Hailed for “astonishing both the pop and classical music worlds” (Guardian), Shaw’s list of collaborators is vast and varied, including Kanye West, Nas, The National, Sara Bareilles, Ben Folds, Renée Fleming, Inon Barnatan, Dawn Upshaw, Sō Percussion, Gil Kalish, the Orchestra of St. Luke’s with John Lithgow, the Dover Quartet, Brooklyn Rider, and more; she has also appeared on Mozart in the Jungle.

When describing the power of performing the works on Orange, Attacca Quartet explains that “playing and listening to Caroline Shaw’s music can turn a concert hall into your own peaceful living room. Between rehearsals and performances, we found ourselves marveling in the unassuming honesty of every passage and the profound effect it has on ourselves and our audiences.”

Bandcamp Daily  your guide to the world of Bandcamp